Home > Blog > Articles > How to throw the ultimate 1920s-themed party

How to throw the ultimate 1920s-themed party 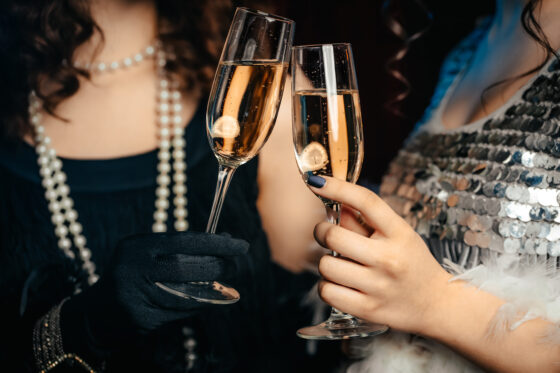 Okay, so Covid seems to have reared its ugly head again and looks set to cause more havoc to hospitality and entertainment. However, with any impending lockdown restrictions likely to be relatively short-term, hopefully thoughts will soon be able to turn once more to events and parties. Before we know it, we’ll all be back out again. What better way to get things back on track than a 1920s Party? So, here’s some advice for how to throw the ultimate 1920s-themed party.

The 1920s was a big decade and you can take a wealth of great ideas and inspiration from the period. We can’t cover everything here. So, we’ve decided to focus on just 3 of the most popular aspects of this dazzling decade.

The popular choice for the ladies at fancy-dress 1920s events, Flapper girls are one of the most iconic and memorable visual images of the decade. The period after the First World War was a time of fantastic liberation for women. Jazz music was the perfect soundtrack for vitality, freedom and a carefree nature. The flappers started wearing clothes that were easy to dance in. Higher hemlines and relaxed fits were combined with heels and eye-catching make up. The rest, as they say, is history.

And you can bring a little bit of history into 2022 with our signature 1920s jazz band – The Jazz Spivs – and they can be accompanied by our very own Flapper Girls too. They are sure to get everybody up on the dancefloor for a Charleston – the perfect scene for the ultimate 1920s party

Ultimate 1920s Themed Party: How about a Great Gatsby Party?

F Scott Fitzgerald’s legendary character, Jay Gatsby, is best known for his excessive and extravagant parties. Therefore, the man and the iconic novel he is from – ‘The Great Gatsby’ – and become the perfect inspiration for those who want to put on a lavish event.

Another perfect excuse for dressing up to the nines, a Great Gatsby-themed event really is the ultimate in 1920s style. Think gold, think OTT, think Gatsby! Of course, music would have been a major party of any party that Jay Gatsby threw. This is where our authentic 1920s band comes in – The Jazz Spivs.

Ultimate 1920s Themed Party: All the style of the Speakeasy

A product of the time, the Prohibition era of the 1920s gave birth to the speakeasy. Speakeasies were the antithesis of the parties enjoyed by the Gatsby Long Island elite. However, with their secretive and underground nature, and dark and dingy settings, speakeasies had a style of their very own.

The underworld connections and links to crime makes a speakeasy-themed party a popular choice for events. Again, it’s another great excuse to dress up. You can have fun with invitations and enter into the spirit of the original speakeasies by giving a set of clues for your guests to find the secret location of the event.

No speakeasy would be complete without a live jazz band. Once again, this is where The Jazz Spivs come in!

Get in touch if you would like the perfect jazz band for your ultimate 1920s-themed party.