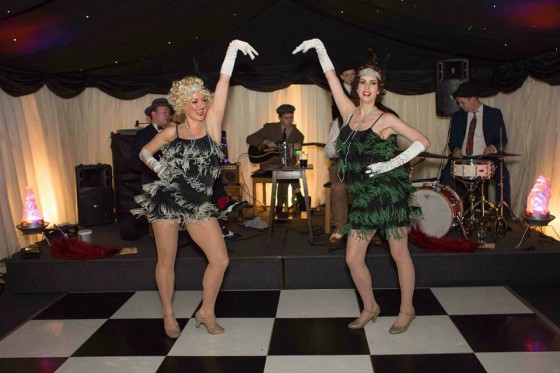 No one quite knows where the word comes from originally, or even when it first appeared, but ‘flapper’ has still become synonymous with energetic Charlestons, sleek bob haircuts, and drop waist hemlines.

Flappers are a fancy dress mainstay and becoming an even more popular revival as we approach the next ’20s’. But do we know their origin? Here’s where it all began…

The 1920s was the birth of the flapper. The First World War was over, women were more liberated than they’d ever been, and fashions reflected that. Hemlines rose, haircuts became more androgynous, and the lines between what was expected of men and women started to blur.

It’s not particularly easy to dance in a corset and long, flowing skirt, so flappers ditched the restrictive clothes and started wearing mid-calf length skirts with a relaxed, straight shape. They also wore dramatic makeup and higher heels – radical for the time. The fashion spread, until an American bank introduced an ‘anti-flapper dress code’ in 1922 to try and clamp down on skirts any higher than “twelve inches from the ground”.

Image: George Rinhart / Corbis via The Smithsonian and Getty Images

Flappers symbolised carefree youth and vitality, so jazz and any popular 1920s band was the perfect soundtrack for their antics. Jazz music and jazz clubs were huge in the US at the time, so flappers had plenty of places to go.

One of the most famous flappers was Lois Long, who wrote a column for the New York Times about all the wild jazz parties she went to. She apparently wrote her columns as soon as she came home in the early hours, so they were an understandably stimulating read.

Celebrated in film and literature

F. Scott Fitzgerald is one of the most famous writers to popularise the flapper, featuring them in his short stories and debut novel This Side of Paradise. His take on the Jazz Age got middle class America talking, as it was a world many of them were too prim and proper to be exposed to. Flappers were part of that slightly dangerous appeal.

On film, Louise Brooks was one of the most famous flappers. She originally performed on the stage and went onto star in some of the 1920’s biggest productions. Her original bob haircut is credited for starting the trend, a style that’s endured for nearly 100 years.

Not everyone was enamoured with flappers, there were plenty who considered them a terrible example of ‘modern femininity’. The criticisms were usually aimed at their clothes. According to a Harvard psychologist, they had “the lowest degree of intelligence” and were “a hopeless problem for educators”. Some states tried to add skirt lengths and necklines into the law, and gynaecologists even claimed flappers were “less marriageable”. All that fuss over a few parties…

Bring flappers into the 21st Century with our 1920s band

We probably wouldn’t even blink at the flappers’ antics now, but they’re still very desirable party guests. You can bring them to your very own 1920s party to make it extra authentic by booking the Jazz Spivs.

Our 1920s band can bring their flapper dancers along with them to your event or party. They’ll get everyone on their feet for a cheeky Charleston and show them how it’s done.

To put on the ritz, give us a call.